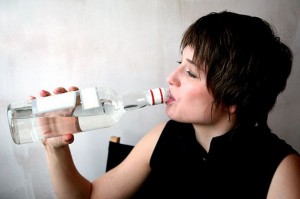 GLENWOOD SPRINGS, Colo. — After more than 100 years, the city has decided to change the name of the annual Strawberry Days celebration.
“We’re sick of strawberries,” said a representative from the Glenwood Springs Chamber Resort Association. “We decided we wanted something more fun.”
Starting with this year’s festival from June 19-21 the new name will be “Vodka Days,” with the theme of “Already Gone.”
Instead of the same ol’ strawberries and ice cream after the parade, there will be free
shots of vodka offered.
Strawberries dipped in a marijuana-infused chocolate sauce and other marijuana edibles will also be available.
“It actually works out well for everyone,” said Glenwood’s police chief. “The crowd will be mellow, which will give us fewer problems and the food vendors will do a much higher volume of business.”
The carnival has been cancelled, since it was decided that the spinning, whirling rides might not be a good idea with Vodka Days.
Arts and crafts will still be available, but new vendors from adult book stores will also be selling magazines, movies and other items.
In Sayre Park, the three Garfield County Commissioners are expected to perform a burlesque routine on stage, after of course, a good quantity of vodka.
“You’re going to be very surprised at what we’re wearing…or not wearing” one commissioner said with a smile. “This is, personally, something I’ve wanted to do for years.”
Miss Vodka Days will be crowned at Doc Hollidays Tavern, although because she is under 21, will be given a shot of water instead of booze.
“We know some people won’t approve,” the chamber representative acknowledged. “But Nederland has ‘Frozen Dead Guy Days,’ so what’s wrong with ‘Vodka Days?’”
Cheers!

← House of Horror for Husbands
Stoned on the range →