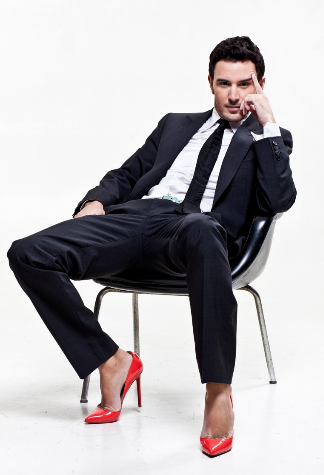 Stilettos in Silt for men!

SILT, Colo. — There’s a new trend in Silt that will almost certainly put the town on the map.
Men are now wearing stilettos.
“The first time I saw a guy walking down Main Street in high heels, I almost crashed my car because I was staring at him,” one driver said.
Apparently many of these men have been wearing their mother’s heels since they were kids.
Little girls are known for dressing up in their mom’s clothes and shoes…but little BOYS?
“I think quite a few boys in Silt wear their mother’s high heels, but probably in private,” one man said. “And we grown up men like to wear heels, too.”
The biggest challenge is for the men to find a size that will fit their feet. Not a lot of stilettos come in large men’s sizes.
Most of the males wear them to prom or to weddings or just to dance around in private in their bedrooms with a Boy George CD blaring.
It is rumored that the next statue in the roundabout will feature a naked man sporting a pair of stiletto heels.