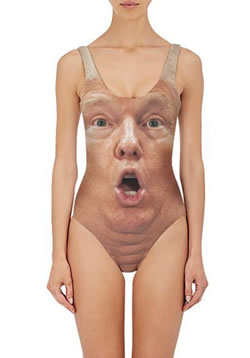 Trump bathing suit all the rage

RIFLE, Colo. — A certain bathing suit style is flying off the shelves of local retailers and we’re not talking about thong bikinis here, folks.
We’re talking about a one-piece suit that features the likeness of President Donald Trump’s face on it.
“I just love wearing it every time I do a belly flop into the pool,” one swimmer gushed. “It makes me feel like I’m slapping him in the face, without getting in trouble. Rachel Maddow would be so proud of me.”
The suit appeared on shelves about two weeks ago and store owners say they can’t keep them in stock.
“People come in asking for them,” a downtown clothing merchant said. “I’m thinking that there will be all kinds of women sporting them at the Rifle city pool this summer.”
He added that men were asking when the male version of the suit would be available…
“Or isn’t there a Hillary Clinton version of the suit?” one asked.
The guy next to him shook his head.
“Dude, you’d get shot,” he explained. “Everybody in the pool would experience shrinkage and it wouldn’t be due to cold water.”
The Trump suit is currently out of stock, but retailers say they will replenish it as soon as possible.