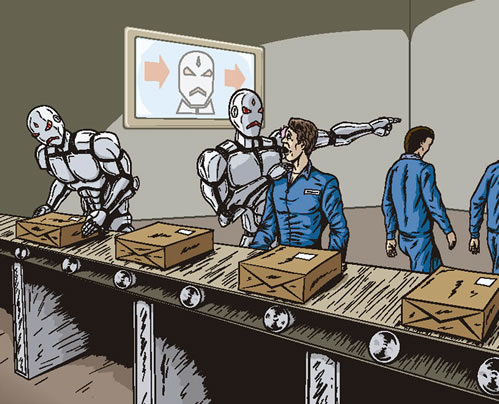 RIFLE, Colo. — It’s here.
The age of the robots is taking over the world and it has now come to Rifle.
The city has opened its first robot-operated pizzeria in which automated machines greet you at the door and seat you. A robot-bartender will then make your drink.
“It’s great, because as a business owner, these robots won’t drink on the job,” the restaurant owner pointed out. “And the robots in the kitchen can make your pizza exactly how you like it, without eating any of it!”
Never mind that the business does not have to be workman’s compensation insurance, health insurance or Social Security payments for the robots.
The Rifle restaurant owner opted to replace his employees with robots after seeing a report about a San Francisco pizzeria in which the “doughbots” kneaded pizza dough five times faster than a human employee.
“And then we have UberEats to deliver the pizza,” the owner said proudly. It all cuts costs and speeds up deliveries.”
It has been speculated that in five years, the pizzas may be delivered by self-driving cars. And that means consumers won’t have to tip!
But making pizza isn’t the only job robots may take on. The following are careers that we will likely be seeing done by non-human beings:
Bartending — The first robotic bar opened in Las Vegas. Customers can place their order at a tablet station or through “Tipsy Robot,” and the robot will be mixed and poured into a 12-ounce plastic cup within 70 seconds. The robots don’t spill and don’t was any ingredients said Rino Armeni, owner of the bar. “They work to perfection.”
Journalism — Both humans and robots can make mistakes, but the bots are quicker, cheaper and don’t require 401K plans or insurance benefits.
Robot journalists are the wave of the future, which should make reporters very, very nervous. Artificial intelligence is expected to eventually take place of the Associated Press and local newspapers around the country.
“God, we might finally get some accurate news around here,” one Rifle newspaper reader sighed.
Airline travel — Robots are expected to start patrolling local and international airports and stalk people they perceive as potential threats.
And you thought the TSA was bad…
Even flight crew members, including the pilot and co-pilot are expected to be replaced by air robots.
And Rifle will feel it as well.
Talk around town is that the Rifle City Council will be replaced by robots, who will actually stay awake during the bi-monthly meetings…