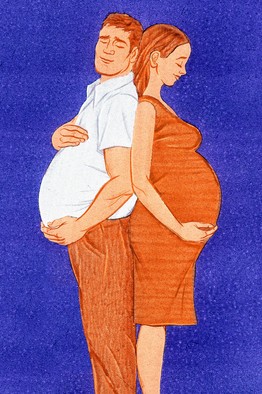 GLOUCESTER, England — A 20-year-old man says he is four months pregnant and will be the first man to give birth, thanks to a sperm donor he found on Facebook.
Hayden Cross plans to have the baby before returning to complete his transition from being a woman to a man. The process will remove his breasts and his ovaries.
Born a girl 20 years ago, he is now legally a man and has begun a hormone treatment.
Cross used an anonymous sperm donor he found on Facebook and put his transition on hold to have a baby with a donor sperm.
“I know I’ll be the greatest dad,” he said.
Cross has lived as a man for the past three years, but was desperate to have a baby.
I faced the prospect of not becoming the man I am supposed to be, p  physically, or a dad, he told a local newspaper. “So I didn’t feel like I had any choice but to have a baby now and then get back to transitioning.”
It wasn’t clear whether he planned to breast feed the baby or not before he had his boobs lopped.