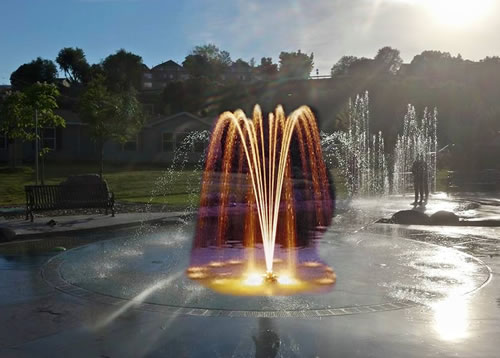 New fountain to be installed in Centennial Park

RIFLE, Colo. —  Residents will see a new feature of Centennial Park this summer after city council members approved the installation of a new fountain that will replace the current one across the walk way from the stage that sprays water on the ground.
But the new fountain will be different.
“This one is going to spew beer,” said Rifle Mayor McCheese proudly. “The New Ute Theater gets to have beer, why can’t the fountain in the park? Instead of just having little kids splashing in the fountain, now the adults will have some fun with it, too.”
The council did all see eye on what brand of beer it should be and one even went so far as to suggest vodka, since it was the same color as water.
Rifle police chief just sat in the back of the room with his head in his hands, very much looking like he was about to cry.
But a member of the Chamber of Commerce pointed out that it really wasn’t such a bad idea.
“It would be the only one of its kind in Colorado and think of all the tourists it would attract,” the marketing director said. “And we could sell commemorative mugs and charge people to fill them up.”
The project is slated to cost more than $500,000, plus the cost of the beer.
“We’ll just raise the sales tax and all the fees for permits and licenses,” McCheese shrugged. “Dog registration will go from $10 a year to $1,500 a year. Parking tickets downtown will be at least $500 a pop and speeding tickets will triple – it’s that simple.”
At this point, there were audible sobs coming from the police chief.
“The best part is that after the bars close, you can stumble over to the fountain has have more beer!” McCheese said.