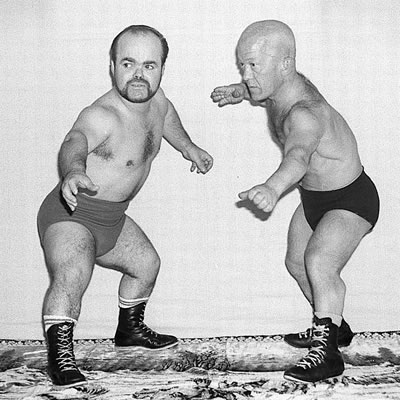 RIFLE, Colo. — Just when you thought the city had it all, in comes a new show to the Farm Fresh Cafe & Steakhouse.
It’s the “Little Mania” show, which translates to, “Midget Wrestling!”
Who doesn’t want to see a bunch of little people wrestling around?
“People like to see midgets wrestling each other,” an employee said. “Tickets for this show are selling like hot cakes!”
We all remember the “munchkins” from the Wizard of Oz, but they didn’t wrestle each other – they just got excited when house landed on the Wicked Witch…
Apparently, the dining establishment did not need any kind of special permit to have the midget wrestling competition.
“It’s entertainment and we don’t regulate that,” the Rifle city manager explained. “In fact, we’d like to see more midget entertainment in town. Perhaps a midget restaurant, or a midget hotel…the possibilities are endless!”
The midget wrestling competition will be held at 8 p.m. on Saturday, May 21 at the restaurant, located at 1733 Railroad Avenue. Tickets are $65 for ringside seats; $50 for second row; $40 for third row; and $15 for general admission. The prices include dinner from 6-8 p.m. They can be purchased at club fresh.me or by calling 625-2384.