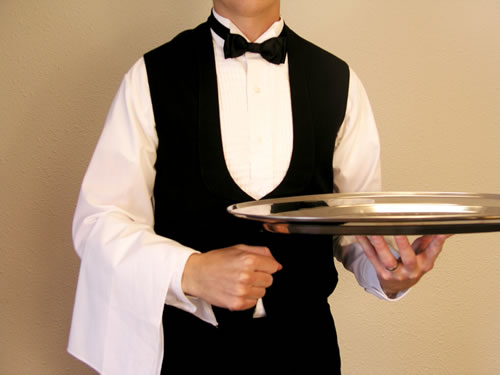 Forget maids! Now we have ManServants!

ManServants have become all the rage and are fulfilling the fantasies of women, (and some men) especially in San Francisco.
It’s a business that the owners say cater to “what women want.”
The job of the “ManServant” is to provide you with everything you want, pamper you with drinks while you sit around the pool and then go into your house and steal all your expensive jewelry, silverware and anything else of value.
But it’s worth it, right?
“You know those men on the cover of romance novels at the grocery store?” said Luvme Longtime of San Francisco. “Now you can make them come true!”
And others agreed with her.
“I’d hire one of those guys in an instant,” said Bill Bananaeater, a former employee of the bathhouses in San Francisco. “They’re HOT!”
The ManServants business was started in the city by the bay last year and has expanded to Los Angeles and New York. It began with two women who decided that women needed a hot male assistant instead of just a male stripper.
“We know from the romance novels, there’s a market for ‘dream men,’ but when it comes to experience, there isn’t anything for women,” one of the founders claimed.
The business claims to offer “a luxury service featuring chivalrous gentlemen offering a non-sexual service.”
The  “gentlemen” will do whatever you want, as long as it doesn’t make anyone uncomfortable and there’s no sex, drinking or drug use.
Ummm, since when do men not want any of those things, is our question!
The cost of a ManServant is  $125 per hour and the men keep $50 to $80. So far, revenues from the company are growing 10 percent a month.
Each ManServant is is interviewed and has to have several essential qualities:
clever, witty, showmanship, a love of women and be “easy on the eyes.”
The ManServants themselves say they maintain a certain anonymity about their age, personal life and how many years they have served in the state pen.
“The fun is in not knowing, I think,” said one ManServant. “I think, keeping that illusion, that facade, is more fun.”