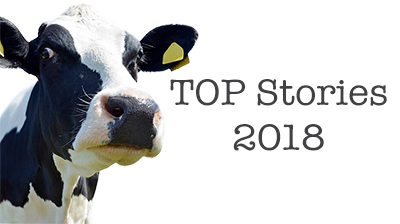 While we look forward to 2019, it’s also time to look at all the ridiculous things that happened in 2018. The following are some of the Cow Pie Courier’s reflections on some of the stories that we covered, in no particular order.

Silt judge admits to being panty thief
A municipal judge was arrested after allegedly stealing multiple pairs of panties from his 22-year-old neighbors home. He was arrested on second degree burglary charges.
“This is an individual who swore to up the law the then violated it by pilfering women’s panities,” the arresting officer said.
However, the judge’s attorney said there was no law in Silt preventing people from pilfering panties.

Overbooked passengers strapped to outside of plane at GarCo Airport
In response to an incident in which a man was brutally dragged from an overbooked United Airlines flight in order to make room for the pilot’s pet Chihuahua, the Garfield County Regional Airport came up with their own solution – to strap down every extra passenger with bungee cords or duct tape to the top of the plane.
“The passenger will be securely fastened and there is no danger,” said the airport manager. “They might miss the in-flight movie, but think of the bird’s eye view they’ll have from up there!”

*Longtime Rifle bar to become AA facility
What used to be a longtime bar at West Third and Railroad Avenue and most recently operated as Big Kid’s Corner, closed its doors and is now being operated as an AA facility.“We figured it was appropriate,” one city council member commented. “It was either that. or someone wanted to open a mosque so the Muslims had a place to worship.”

Nude Dude arrested on I-70
Despite the cold, winter temperatures, a man who had been drinking at a local New Castle establishment, decided to disrobe and take a naked ride down on Interstate 70.
However, he was driving the wrong way on the highway and police were to forced to go the wrong way to chase him.
“Do we give him a ticket for being naked or for driving the wrong way on the Interstate?” the cop asked his partner.
The man was taken into custody and given some orange clothes to wear…

Local man tried to avoid jail by offering cops doughnuts
Although everyone knows cops like doughnuts, a Silt man thought he could use the treats to prevent his happy butt from getting arrested.
The 25-year-old man who worked at a doughnut shop in Silt, offered the cops free jelly-filled doughnuts, cash or to sleep with his wife. The man had been caught peeking into cars, although it was unclear wheather he was looking to steal something or just see a couple going at it in the back seat.

Silt man has angry argument with a parrot
Police were called out to investigate a report of a man heatedly arguing with a parrot, according to cop reports.
A neighbor heard the man screaming at the parrot and the parrot screaming back, although it wasn’t clear what the two were arguing about.
“I think somehow he pissed off the bird and the bird wasn’t going to take it anymore,” the neighbor said. “It’s the man’s girlfriend’s parrot and I think the parrot was making discerning comments while the couple was having sex.”
When the cops came and took the parrot to a local animal shelter, the bird looked at them and simply said, “Thank you.”

Drunk woman arrested for violating Easter Bunny
A 54-year-old woman was arrested in Rifle for allegedly making lewd comments to the Easter Bunny in Centennial Park.
The woman, who appeared very intoxicated, was having her photo taken with the bunny when she began bouncing up and down on his leg and making nasty remarks.
“It’s just not right to violate the Easter Bunny like that,” a police officer said.

Rifle men skirt the issue of ‘Me, Too’
In response to the national issue of male sexual abuse to women, the men of Rifle are showing their support for women by wearing skirts.
The trend is now part of the 2018 Menswear designers, who are promoting it on their runways.
The hottest look is a wrap skirt with a matching jacket or a flirty full skirt, complete with ruffles and little butterflies.
“A lot of these guys just like wearing a skirt – like the Scottish!” the Rifle mayor proclaimed.

Cat pack fever!
Some people pack extra shoes in their luggage…but a CAT?
A security officer at the Garfield County Regional Airport discovered a cat in a man’s luggage that he was trying to check in.
“Although the cat looked quite comfortable lying in the clothes, that’s not how we recommend people to transport their animals,” the officer said.
The X-ray machine is not a good idea for your pet to go through, either.
“My best advice would be to just leave your animal at home with a sitter or put it in an animal kennel,” a local veterinarian said. “Either that, or get the pet a seat on the plane and check yourself into the cargo section and see what it feels like…”

Mad pooper strikes in Silt
Sometimes people read the news and decide that’s exactly what they want to do, too.
At least one woman in Silt felt that way after reading about somebody defecting on people’s lawns for no apparent reason and decided to copycat the crime.
Dubbed “Polly Pooper,” she began taking a crap on lawns all over town.
Silt police sought to find the mystery pooper and failed a criminal mischief report on her.
“We’ll ticket the shit out of her as much as we can,” an officer said.