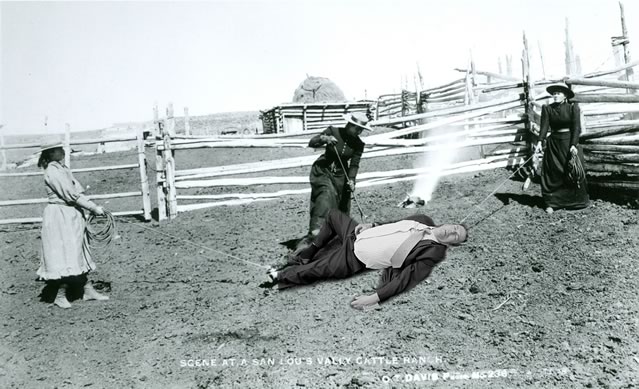 NEW CASTLE, CO — It may be branding season, but it ain’t the cattle who are scared in this town.
Sick and tired of their wandering ways, the women in New Castle have decided to mark what is theirs the same way ranchers do to their calves.
They’re branding them.
“It ain’t too sexy to pull your pants down when you have a big ‘J’ burned on your butt,” said Ella Jackson, who branded her husband, Bob, with the help of their two daughters. “And the ‘J’ doesn’t stand for ‘Jackson,’ it’s for ‘JACKASS,’” she fumed.
The practice has become known as “man-branding” and ranch wives throughout the town are jumping on the proverbial “brandwagon.”
“My Henry hasn’t even GLANCED at another woman,” one wife said. “And I heard him talking to the bulls when he thought no one was looking and profusely apologizing to them.”
When asked if they thought what they were doing was cruel, the women defended themselves by saying it was really no different than getting a tattoo.
At the last branding, several townspeople reported seeing a bunch of cows standing at the fence watching. Some said they appeared to smiling and giving each other a “high hoof.”