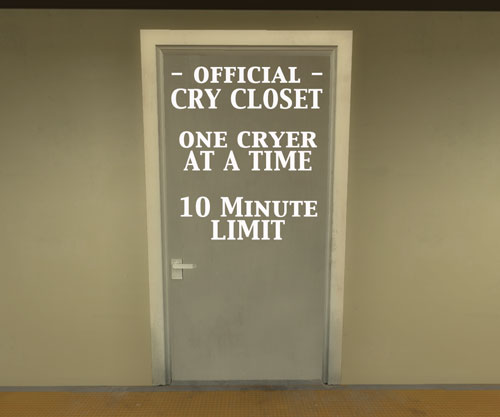 By Chester Cheatalot
RIFLE, Colo. — Local college campuses in the valley have now installed closets filled with large stuffed animals where students can go and cry, as a coping mechanism.
The closets have a strict 10-minute cry policy as a space for “stressed out students” to have a breakdown in the privacy large wooden box.
“We figured it was better than the alternative of random sexual acts or things of a suicidal nature,” the district manager explained.
Along with the 10-minute cry limit, the closet rules also require students to know before entering to ensure one’s stress-induced bawling is interrupted by anyone else.
“A person having a mental breakdown should not be disturbed by anyone else,” the district official explained. “One should be allowed to have an emotional breakdown all by one’s self.”
The idea of the cry closet is being celebrated not only in Rifle, but across the country.
“We have a cry closet for our players when they lose a game,” said the Rifle Bears football coach. “We encourage the players to cry and wail when they’ve played like hell.”
According to studies, the release of tears is a natural reaction to stress and a way to reduce it and reduce physical and emotional pain as well as decreasing the risk of cancer and heart disease.
Journalists have long used newsroom bathrooms to go sob after an editor has ranted on them or someone has called and read them the riot act.
But there are some people who say that crying in public is no worse than breast-feeding.
Cry closets are definitely the wave of the future…

← Man attempts to get burrito, not money, from drive-through bank
You can’t pick your nose, but you can pick your grades →