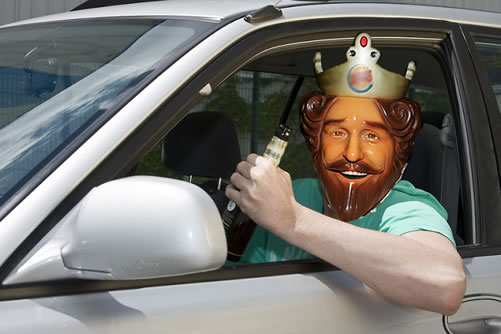 RIFLE, Colo. — According to rumors, Burger King may soon go out of business here in town, but at least one local man now claims the name.
In true holiday spirit last Tuesday at 10:55pm, a drunk driver crashed his car into the center of a roundabout in south Rifle and was subsequently contacted by Rifle PD. According to police reports, the 55 year old Wilbur Hollister, told officers “My name is King, sir. Burger King,” and he smelled heavily of bourbon whiskey and beer.
When Hollister repeatedly failed to cooperate with both police and Colorado River Fire Rescue EMT’s for over an hour, he was finally handcuffed and put into the drunk wagon. At one point he reportedly told them he owned all the Burger Kings in the entire world, and if they didn’t leave him alone he “would call his friend Donald Trump to beat them up.” “And then he put out his hand and said, ‘Pull my finger.”’
The suspect was charged with allegedly driving under the influence, resisting arrest, reckless driving, failing to reduce speed to avoid an accident, operating an uninsured vehicle, causing $20,000 damage to public property, and basically being a bumbling idiot.
He was lodged into the detox tank in Garfield County Jail and was allowed one phone call. Nobody at the Burger King restaurant would take his call and they hung up on him.