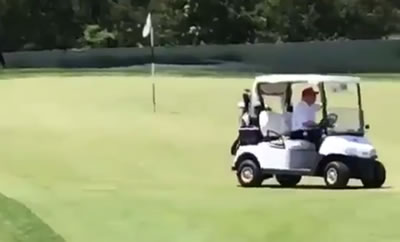 WASHINGTON, D.C. — President Donald Trump is facing impeachment after receiving a ticket from the Secret Service for committing a T.W.D., which stands for Tweeting While Driving. The President was captured on video driving a golf cart on the White House putting green and doing donuts while tapping on his cell phone.

The impending trouble comes shortly after he was chastised for driving his cart on his own golf course in Bedminster, N.J.
“Tweeting while driving is against the law in Washington D.C.,” said a local DWI attorney. “If you’re caught behind the wheel sloshed as a three-eyed goat, the penalties for TWD can be just as harsh, depending on how rich you are.”

Several members of the senate are calling for an investigation and another special prosecutor.

One senate member was quoted from an anonymous source as saying, “No President in history has ever driven a cart on the White House putting green. We need to get to the bottom of this, but we can’t address the matter until we return from our all of our vacations.”

If found guilty, President Trump could face impeachment proceedings, and would be personally liable for repair costs to the putting green with the potential of having to serve time in a Tweeting Anonymous rehab center, or homeless camp, depending on the judge’s mood.