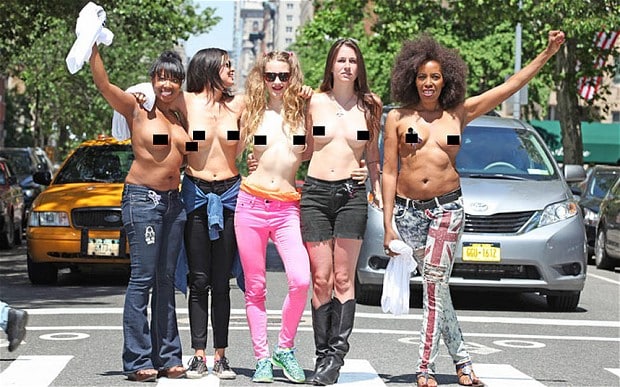 SILT, Colo. — It’s a little cold now, but come this spring and summer, expect to see topless women roaming around the streets of Silt, showing their breasts in public places.
This comes after a federal judge in Denver recently ruled that the town cannot enforce a policy banning women from whooping their breasts.
The ruling came after one woman asked, “If men can go topless, why can’t women?”
To which the judge agreed it was far more revolting to see half-naked men in Silt than it was women.
“Although, neither is really a pretty sight,” one attorney added.
The group starting the opposition to the ban is called “Free the Nipple” and claimed that the policy banning topless women discriminated against female breasts.
The Silt Town Trustees up held the policy, but said they will adhere to the judge’s wishes, but will    keep the topless ban in place for breastfeeding women or girls under 10.
Police have argued that topless females right distract drivers and cause traffic issues that disrupt public order while others say all it would do is make car dealerships include barf bags in all the vehicles they sell.
The judge, however, disagreed with the argument that seeing a woman’s breasts could harm children and pointed it out it is one of the first thing a child sees.
“You’ve obviously never been to Silt,” one attorney shot back.