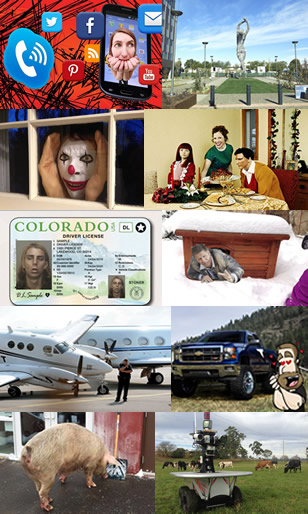 The year was full of lots of stories, including Bruce Jenner turning into a woman, the battle between Trump and Clinton in the presidential election, consideration of installing transgender bathrooms and a passenger on a flight passing a note to the flight attendant to make an announcement that whoever sitting somewhere between rows 10-12 had been farting so much, they should probably see a doctor.

But locally, we had our own share of news that happened in 2016. The following is the Cow Pie Courier’s pick of those stories, in no particular order.
1) Digital detox being offered in Rifle – Local law enforcement proposed that the detox camp be held to help those addicted to their mobile devices.
“This is worse than the concealed carry gun law,” one officer pointed out. “More people get killed by people distracted on their mobile devices than anyone carrying a gun.”
2) Nude woman statue to go in Silt roundabout – While town residents protested a statue of a naked man climbing a rock in the roundabout in the center of town several years ago, town officials have now decided to replace it with a 100-foot statue of a naked woman.
“We figured people were probably getting sick of looking at the guy’s naked butt,” one town board member explained. “We figured the woman’s butt would go over better.”
The statue is supposed to be anatomically correct or “pretty close.”
However, some enforcement expressed some concern that drivers might actually run into the statue while staring at it instead of focusing on the road.
3) Rifle man sentenced to dog house on Valentine’s Day – A local man is in big dodo after he made the ultimate mistake. He mixed up the Valentine’s Day gifts between his wife and his mistress.
He didn’t realize his mistake until his very large wife came into the bedroom wearing a size 2 negligee.
The mistress called him, furious, when she received the large orange moo-moo.
The wife eventually became suspicious and put him in the dog house, literally for an indefinite amount of time as punishment.
4) Woman uses mannequins instead of real family members – A woman seeking the “perfect family” believes she come up with the perfect solution.
She has created mannequins that she lives with.
The woman was probated by family and friends questioning why she was still single in her 40’s.
“I have an imitation family of a husband and one child,” she reportedly said. “ have the perfect husband and the perfect child. I have there perfect home and we go on the perfect vacations.”
5) Send in the clowns! – There have been several reports of creepy clowns roaming around municipalities in Garfield County and residents are being warned to stay inside and keep their doors locked.The sightings have been reported around the country. Police are warning local resident not to chase the clowns down with a machete as one North Caroline man did.
They are also advised in dressing their children in clown costumes
Walmart took the scary clown masks off the shelves this Halloween and will instead replace them with little pink tutus. Singer Judy Collins refused to comment on her 1975 hit song, “Send in the Clowns.”
6) New driver’s licenses being issued to Colorado stoners and texters – When your license expires now, you can expect to be issued a license with a whole new look. License information will require that you reveal whether or not you’ve previously been caught driving stoned or while texting.The card design includes laser engraved information and new card material. It will even give off the smell of freshly smoked pot. For more information about the new licenses got to www.colorado.gov/dmv/wastemoremoney.
7) Large pig unhappy with New Hampshire primary –  A 600-pound pig was seen at a  polling place in New Hampshire in February. The pig sauntered toward a polling place in the town of Pelham, N.H. as voters turned out to cast their ballots.
The pig wandered around the school building, sniffing it out. Police tried to corner the animal and get it away from the voting public and students, but the pig became belligerent and started to get snippy, grunting and squealing and snapping at people.
Police said apparently the pig was unhappy with the choice of candidates. The owner, from a nearby farm, came to the high school, put a rope around the pig’s neck and escorted it out of the area.
8) Clinton, Trump run into each other in Aspen – Hillary Clinton was flying from Denver to Aspen on a campaign stop and her pilot apparently didn’t see another small plane sitting on the tarmac a Sardy Field in Aspen with Donald Trump on board.
A loud shouting match ensued between the two candidates and police had to be called to quiet the kicking, spitting and screaming candidates, running in the presidential election.
“I’m glad NBC cancelled your stupid Miss USA pageant,” Clinton screamed.
“And you’re UGLY,” Trump yelled back.
When police arrived, each party was issued a summons for disturbing the peace.
9) Robots to replace Rifle ranch hands – Hundreds of ranch hands will be o ut of work now that autonomous robots are taking their place, monitoring crops, counting yield and digging up weeds.
The “farmbots” will also herd livestock, look after their health and check that they have enough pasture to graze on.
“Why should we pay workers when we can use robots?” one Rifle rancher said.
The change will put many ranch hands out of a job.
The farmer also pointed out that farm labor is in short s supply because they have all left to go work at Starbucks.
10) Man attempts to have sex with truck’s front grill – New Castle police officers were stunned when they received a call from a resident saying that a man was attempting to fornicate with the front grill of his pickup truck.
According to 911, the man was sticking his private parts into the girl. Police initially thought it was a prank call, but when they responded, the man appeared to be under the influence and had his pants around his ankles.
He was issued a $22,500 bond and taken to the Garfield County Jail.
Others have also reported amorous feelings for their trucks.
One woman reportedly married her truck, saying the sex was “amazing.”