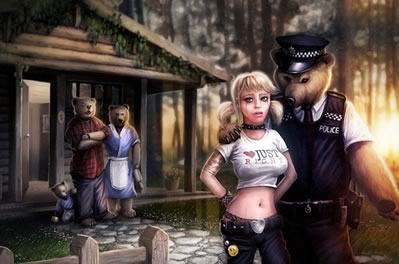 SILT, Colo. — At least Goldilocks wasn’t drunk when she slept in a bed at the bear’s house.
But Gracie Guzzlemeyer was quite intoxicated when she climbed through a window of a Silt home after a night of heavy drinking in downtown Silt.
Guzzlemeyer had allegedly been attempting to go to a relative’s house, but when she couldn’t get through the window, she staggered another mile away and found another house with an open window and successfully got in.
The homeowner woke up to find found Guzzlemeyer in the bed with him and called police.  She was apparently still passed out when they arrived.
“Well, I’m not sure if she was asleep or just passed out,” the reporting officer said. “But her purse was outside the window with all of her identification in it and the names and numbers on drink napkins of at least 15 men.”
Clearly, none of them wanted to take her home.
After shaking Guzzlemeyer repeatedly to rouse her, she finally opened her eyes.
“Why you little devil,” she slurred and smiled. “I love the police officer costume. Come here and show me your big gun.”
Guzzlemeyer was charged with burglary and trespassing for breaking into the house and was carted off to a bed that had bars on one wall.