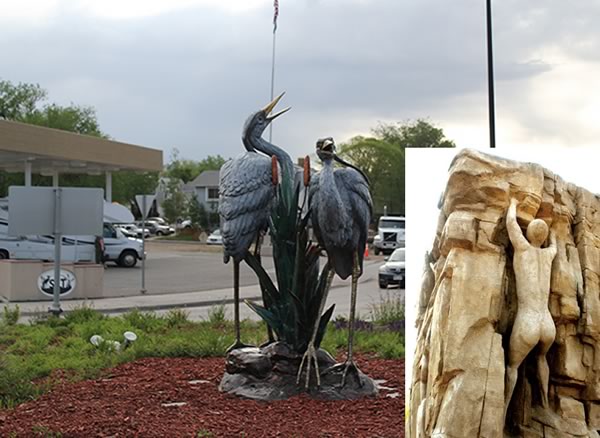 Silt unveils most boring statue ever

SILT, Colo. — No more nude rock climbing statues for this town.
No, siree. The town has replaced its controversial roundabout statue with some thing way more exciting – two herons.
“We figure it’s really boring, which reflects the whole ambiance of the town,” said the Silt Town manager. “When you come to Silt and go through the roundabout, you know what to expect.”
But some residents are protesting the new sculpture, calling it “boring” and “uninteresting.”
“I know we’re boring and uninteresting,” the town manager maintained. “But that’s what Silt is about. This new sculpture is so ordinary and mundane and dull. But on the other hand, it does reflect the the true character of the town.”
Residents were up in arms several years ago when the roundabout featured a sculpture of a naked man climbing a rock in the middle of the roundabout.
At one point, a person even pinned a cloth on the climber to hide the offensive behind. The council then considered placing an ordinance that would put cloths over the faces of local intoxicated bar patrons.
Town staff made a huge deal out of the unveiling of the two herons.
Those who came in excited anticipation of the unveiling were soon found to be sleeping alongside of the road on Main Street…