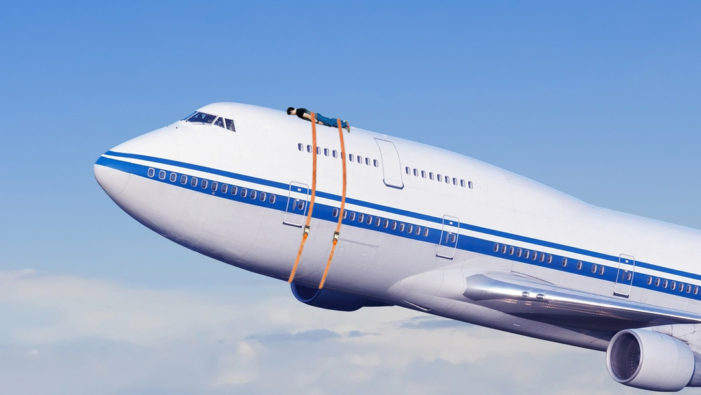 Overbooked passengers strapped to outside of plane at GarCo Airport

RIFLE, Colo. — In order to ensure that what recently happened on a United Airlines flight in which a man was brutally dragged from an overbooked United flight in order to make room for the captain’s pet Chihuahua, the Garfield County Regional Airport in Rifle has come up with another solution.
“No passenger will be denied a place on an oversold flight on one of our flights,” said airport manager Harry Krankopf said proudly. “We have found a way to solve the problem.”
The solution will be to strap down every extra passenger with bungee cords or duct tape to the roof of the plane. Passengers may also be tied to the wings or the belly of the plane, if need be.
“The passenger will be securely fastened and there is no danger,” Krankopf insisted. “They might miss the in-flight movie, but think of the bird’s eye view they’ll have from up there! They should pay US extra for the opportunity. I’ll bet some day the space shuttles will do the same thing!”
It is unknown what steps the Garfield County Airport will take after United Airlines again faces turmoil when what to be the world’s largest bunny croaked in the cargo section of the plane from London to O’Hare after having been pronounced perfectly healthy three hours beforehand.