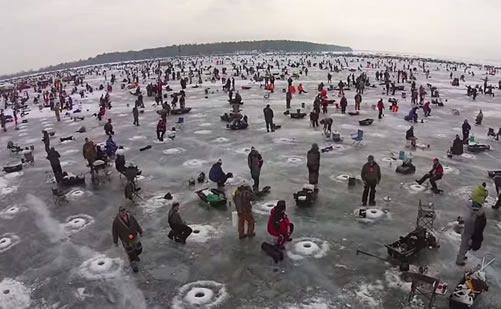 RIFLE, Colo — If the idea of being at Rifle Gap State Park at 5 a.m. and then waiting around three hours until 8 a.m. to participate in an ice fishing contest for eight hours sounds like a hoot, you won’t want to miss the 2017 Rifle Gap Ice Fishing contest being held Jan. 21 and 22.
Ice fishing basically basically a fun-filled sport that involves cutting a circle in the ice and hoping no one falls in, but that a fish will come out.
The two divisions are trout and perch and the categories include men, women and children.
The tournament is one of the longest running tourneys in the state, but things will look a little different this year with a new group taking over because the chamber didn’t want it anymore as the number of people attending was dwindling and nobody from the chamber wanted to sit out in the cold and freeze their butts off working the booths.
“We are working to get this tournament back on track full blast in the next couple of years,” said a member Ice Fishing Colorado, which took it over.
One of the changes is that instead of limiting the number of people that are allowed on the ice at one time, and will be allowing anyone who wants to go out with their children will be allowed – despite the dangers of too much weight on the ice.
And when you register, you are also required to sign a waiver that states who your beneficiaries are, and an agreement not to sue if your loved one falls through the ice or dies from hypothermia.
After Saturday nights tourney, everyone is invited to come to a party and drink heavily, although this increases the chance you may injure yourself on a lure at Sunday’s tourney because of  your screaming hangover. Those who throw up on the ice will be fined.
“Aw, we’re used to it,” one local fisherman said. “We drink and go skiing all winter long!”
The tournament ends at noon on Sunday, followed by an awards ceremony in which prizes, that include bobble heads of local city officials.