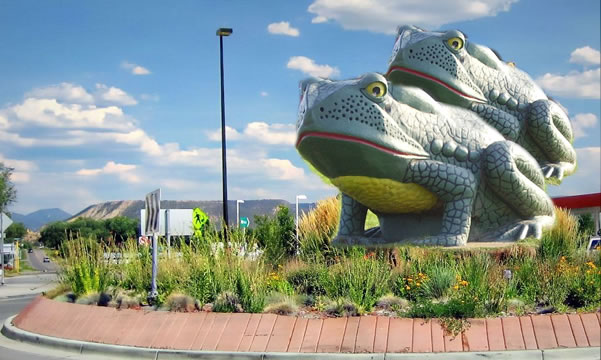 SILT, Colo. — Tired of hearing complaints about the naked butt climber at Silt’s roundabout, the town has decided to replace it with a new piece of artwork that they hope will satisfy everyone and stop all the bitching.
Rumor has it the new roundabout will feature two mating frogs in a pond (of silt.)
“We think it’s natural and reflects the spirit of Silt,” the town manager said with pride. “This shouldn’t offend anyone.”
Silt received many complaints about the climber, including someone who even pinned a cloth to cover the statue’s rear end. The statue was also beheaded in 2011. Attempts to put a female rock climber with breasts pressed against the rock didn’t go over well, either.
The naked male rock climber will be relocated to the water treatment plant where it can be viewed by those traveling down I-70.
Which naturally does not set well with the Silt Police Department.
“That’s just what we need,” the police chief said, shaking his head. “A bunch of people on the highway staring at a statue of a naked guy’s butt instead of keeping their eyes on the road.”