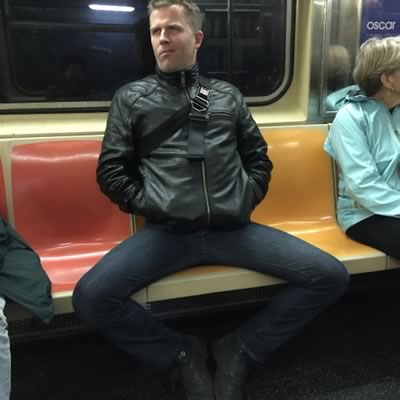 GARFIELD COUNTY, Colo. — Women are not the only ones being told to “close their legs,” now that RFTA has implemented a new rule on its buses, which carry passengers throughout the Roaring Fork Valley.
Men are now forbidden to engage in “man spreading”in which they sit with their legs spread far apart, sometimes taking up more than one seat and forcing other passengers to stand.
“I can’t help it,” one male man spreader said defensively. “It hurts if I close my legs!”
The lady standing up holding on to a pole for dear life just rolled her eyes…
In their defense, men have pointed out that women often take up more than one seat either with their purse and shopping bags, calling it “she-bagging.”
According to some studies, man spreading found that images of men spreading their legs made them more attractive to female viewers. However, women crossing their legs were viewed my males was feminine, whereas a woman sitting with her legs spread wide open was simply viewed as a potentially fun one-night stand.
RFTA officials have said that anyone caught man spreading on the bus will be forced to launch into a Chippendale-style dance in thong underwear to prove the need to spread their legs wide apart.