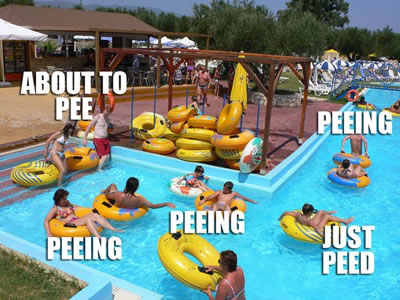 Everyone pees in the pool

Exactly how much urine do you consume a day?
Well if you go to your public pool or hot tub, you are definitely encountering urine as a test has shown that 100 percent of pools from samples gathered by scientists, who in fact, admitted that they too had peed in a pool.
The tests showed that pools from Rifle to Glenwood Springs have the most urine in them.
We have long suspected that the famous Glenwood Hot Springs Pool, especially in winter, is like a large petrie dish. But thankfully, the steam that rises from the pool masks those who are relieving themselves in it.
Let’s face it. You can’t take a bunch of kids and tell them not to pee in the pool. In fact, even adults admit to doing it.
“There is scientific evidence that people pee in pools,” the lead author of the study said. “Especially in the pools in Glenwood, New Castle, Silt and Rifle. Out of the entire country and samples taken, these pools and hot tubs had the highest level of urine.”
But why do people use a pool as a giant communal toilet? Why don’t they get their happy butts out and go to the restroom like civil people?
“There’s something about the warm water that just makes you just have to go,” said one Olympic swimmer, who also said he found it acceptable behavior.
The study did not indicate whether the people that pee in pools also pee themselves while at a restaurant, sitting at a stop light or playing a game of golf.
Although sterile, products in urine can lead to eye and respiratory irritation and long term exposure has been linked to severe sexual dysfunction.
Those that tell their kids not to pee in the pool or a red cloud will surround them, causing complete embarrassment are wrong. That story is a myth, according to the study.
“This is a myth used to scare children and adults not to pee in the pool for fear of public humiliation,” the study says. “There is no dye or urine dictator that could be used in a pool.”
So pee away, people! That person standing next to you isn’t admiring the mountains. They’re peeing in the pool.

← People who don’t use Facebook are happier and have less stress
A cow that thinks she’s a dog? →