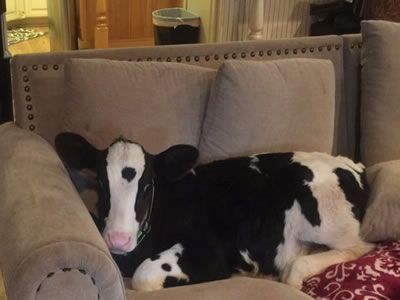 A cow that thinks she’s a dog?

A cow that thinks she’s a dog. Who’d think?
But Goliath does and the small calf, who was rescued from a diary farm was scheduled to be slaughtered, was in good shape.
But he was save by a high school sober who lives with her family on a ranch in California said the Goliath was “so weak and small that he couldn’t stand and you could pick him up very easily.”
And pick him up she did.
He has now been nursed into a healthy 8-week old calf, except for one thing.
He thinks he’s a dog.
Goliath was raised with the family’s three dogs and they chase and play together and he watches how thy eat their dog food and drink their water from their bowls, and so copies them. He lays in their dog beds and love scratches on his neck and around his ears.
Goliath has also made best friends with one of the family dogs,who took to mothering the little cow and would lick him on the face and try to nudge him to stand  up.
Now the cow knows how to open the door handle and comes and sits on the couch like the other dogs.
Photos of the dog-thinking cow have gone viral on the Internet.
We wonder, however, if the cow and the dogs should try to breed, exactly what breed it would be…a dow?

← Everyone pees in the pool
Is that the Loch Ness Monster in Rifle Gap? →