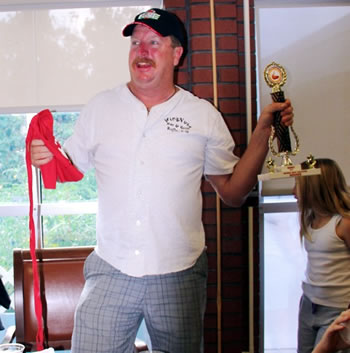 RIFLE, Colo — It really wasn’t that much of a surprise when a successful business owner of a local bar and restaurant that specializes in chicken wings, took first place at the first wing-eating contest held at the E. Dene Moore Care Center in Rifle on Friday afternoon, July 29.
Grady Hazelton, owner of the popular WingNutz Bar & Grill in Rifle managed to scarf down 14 very HOT wings within the three minute time limit. He was joined by nine other people. Chef Matt Archambault of Shooter’s Grill and E. Dene Moore Care Center employee Arrow Longtin both tied  for second and third place, eating 10 wings, eating ten wings a piece. Dear old Husband-Head (Paul Rice) came in at a sorry last place with only three wings.

The event was in honor National Chicken Wing Day and started out with each contestant served with ten wings.
“That’s just an appetizer!” Archambault said. “Give me at least 12!”
Hazelton, on  the other hand, was more concerned about taking off his wedding ring so it didn’t get lost in the mayhem. 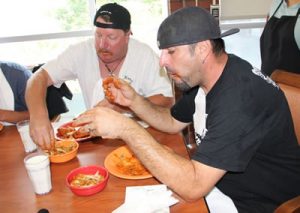 Other participants included E. Dene Mooe Care Center employees Ella Zupcsek, Chris Forney, Nancy Salgado, Walnut Jackson and resident Peggy Ochler..
Judges were Jeff Coombs and Chris McLean, who had to count the bones and make sure all the meat was off the bone in order for it to count.
“The time went faster than I expected,”  Hazelton said, as he had a coo drink afterwards.
“It didn’t go fast enough,” Archambault added.
The biggest question is how Mr. Hazelton felt later on Friday night….

← Forget maids! Now we have ManServants!
Pay a ‘Pooper’ to scoop your pet’s poop! →