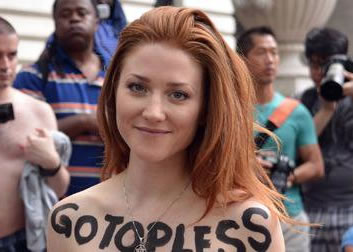 SILT, Colo — Women throughout town plan to remove their shirts in honor “Boobday,” a celebration started by a group called Go Topless Day.  The movement was started by a man in Nevada in 2007.
“We’re upholding our right to free the nipple,” said one woman. “Men get to go topless…why can’t we?”
The women  intend to march down Main Street, letting it all hang out.
“Men are also invited to take part, but they are being asked to cover their nipples with an “X” or a bikini  top or bra,” another woman added.  “If women are asked to cover their breasts because it is indecent, the men should cover themselves, too!”
Hundreds of men are expected to line the street to gawk at the women.
Police said they are not sure how to handle the half-naked women and plan to ask town board members their thoughts on Go Topless Day.
“Since the majority of the board is  men, they probably won’t oppose it,” the officer suggested. I guess it’s legal in Nevada, so it’ll probably get approved in Silt.”