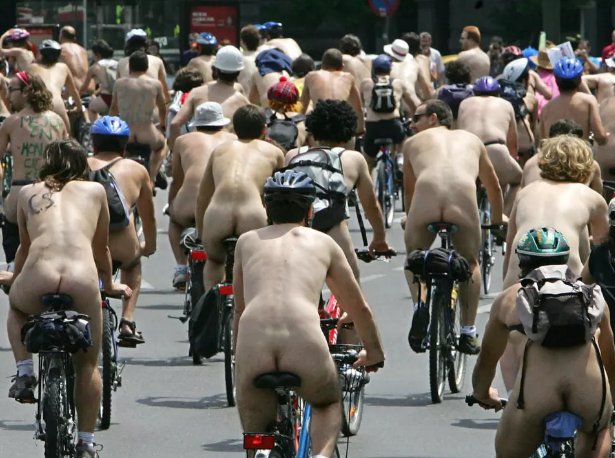 SILT, Colo — In keeping up with national trends, the town’s people have decided to join in on “naked exercising,” as was done in the ancient Greek Olympic Games.
The naked event will include naked yoga, naked swim, naked bike rides and naked gym classes.
“We think people should enjoy  being naked and letting it all hang out,” said Mayor Lester Masher.
Apparently, exercising naked is deeply rooted in history. The monosyllable “gym” is a contraction of the Greekword “gymnasium” which translates to “school for naked exercise.”
Who knew?
Naked women exercising was especially popular, although it’s not expected to be so in Silt…
Other ancient Greek rituals included sacrificing hundreds of animals and throwing any married women who attended off the top of a mountain. This, on the other hand, might very well go over in Silt.
There is also the World Naked Bike Ride in which tens of thousands of bikers participate and celebrate the naked body.
Although it sounds like a 1960’s event, the naked exercising event was actually started in 2004 with the official dress code line of “bare as you dare.”
The benefits of exercising naked are reportedly  more psychological than physical, but provided an elevated sense of self-esteem – especially when you see someone that looks worse than you do…
“Being happy with you body begins with a naked one,” one psychologist said.
The nakedness will begin with nude town board meetings in January.