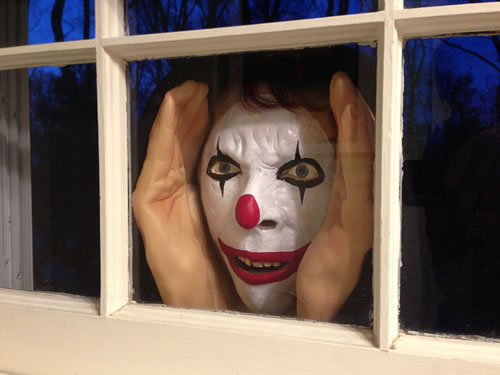 Send in the clowns!

RIFLE, Colo. — As numerous reports of creepy clown incidents have been reported around the country recently, there have now been several sightings in and around the Rifle area, police say.   Police are now warning residents to stay inside and keep their doors locked.
“They may come to your windows at night and press their clown noses again the pane, so it might be a good idea to close the curtains and hide in the basement,” the Rifle Police Chief advised.

Creepy clown sightings have been reported in numerous states around the country and other parts of the world and conjures up memories of serial killer John Wayne Gacy Jr., who dressed as a clown and murdered more than 30 teenage boys in Illinois during the 1970’s.
“We’re not sure if these clowns are a serious matter or if it’s just Halloween prank,” the chief said. “But we’re taking it seriously.”

Police are warning residents against chasing after the clowns with a machete, as a man in North Carolina did.
They also advised against dressing up your children in clown outfits.
At least one school has closed down this month due to a clown reportedly trying luring kids into the woods with gummy treats.

Real clowns, who actually try to make a living entertaining people, have seen a massive drop in demand for their services.  Local clown Rusty Buttons says these clowns are giving him a bad name and he hasn’t made a single party booking in over a month.  “If these creepy clowns don’t go away pretty soon, I am going to go flat broke,” he said.  Even Stephen King, the notable horror author is leery about the creepy clowns, saying they freak him out.  “I don’t mind writing about someone hacking people up, but scary clowns are a little over the top,” he reportedly said.

Walmart has decided to take scary clown masks off the shelves this Halloween and will instead replace them with Pokemon costumes.
Singer Judy Collins, refused to comment on her 1975 song hit of “Send in the Clowns.”