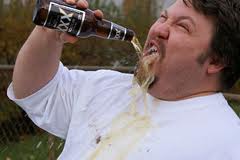 RIFLE, Colo —  City officials are urging residents to  reduce the use of water due to a water main break on June 1 and instead use beer instead.
“We can’t afford for people to drink eight glasses of water per day anymore,” said Mayor McCheese. “We recommend they drink eight beers a day instead.”
McCheese also recommended people bathe in beer, brush their teeth with beer and give their dogs beer instead of water.
Local liquor store owners are delighted with the recommendation, while local police and veterinarians are not so happy.
“So, we’re going to have hundreds of people in town reeking like beer,” the police chief pointed out. “But, on the other hand, that will bump up our DUI ticket ratio and increase our revenues tremendously.”
The water shortage began on June 1 and put watering on strict restrictions as someone screwed up the pipe system going to the water treatment plant. It has been nearly a month for the city to figure it out, although they have now allowed residents to water on odd and even days.
As if police don’t have enough to do, now they’re supposed to go around and monitor whether somebody is watering on the wrong day…