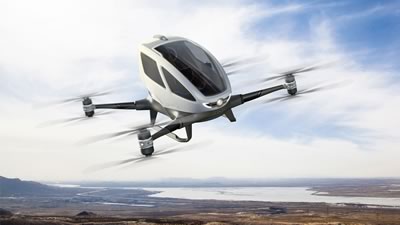 Passenger drones to replace airplanes at the airport

RIFLE, Colo — The Garfield County Regional Airport will launch the state’s first passenger-carrying drone service.
The unmanned aircraft will replace piloted planes.
“It’s basically a flying robot,” an airport official said. “We’ll have robot flight attendants as well.”
It’s been described as a “flying vehicle,” and the operator is not required to have a pilot’s license.
“It’s like the driverless cars,” a county employee said. “They operate on batteries and respond to voice commands such as ‘take off’ and ‘land.’
And if the batteries run out?
“Well, there have been crashes,” the county employee admitted. “But that’s to be expected.”
Especially if people buy their own personal passenger drone.
But to keep everybody safe and not just flying willy-nilly all over the sky, police will be a drone as well, although it’s not clear how they would pull someone over.
“Land your drone NOW!” they will probably yell over a loud speaker installed on top of the machine.
To purchase an individual passenger drone, be prepared to spend $200,000 to $300,000.