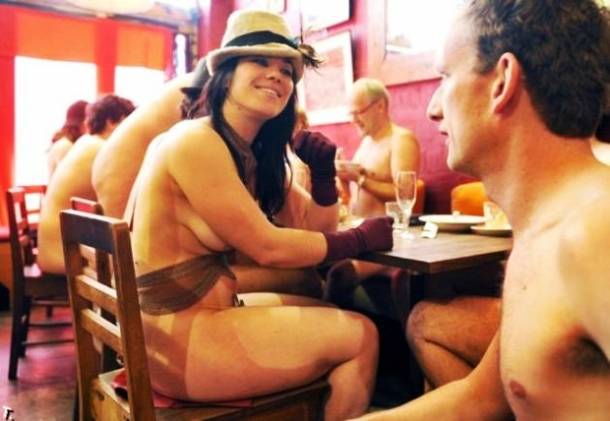 NEW CASTLE, Colo. -The town will open its first clothing-optional bar this summer, copying a similar establishment in London.
Customers at Bare-Bottom Betty’s on Main Street will be allowed to dine in the nude, although the wait staff will be required to wear clothing.
“It’s liberating,” the London restauranteur reportedly told the Washington Post. “It’s fun and sometimes the neighbors watch — fine, whatever.”
The London restaurant currently has a waiting list of more than 16,000 people and is expected to increase.
Town council members unanimously approved the license for the nude bar, saying that it could only improve the number of visitors and the economy of New Castle.
“Who wouldn’t want to see naked people in New Castle?” the town council member pointed out.
However, some of the help had some problems with the whole concept.
“Gross, I don’t want to have to clean those bar stools or booths where people have been sitting naked,” said one server.
In response, the owner of Betty’s said she will be providing robes for naked people to sit on so that bodily fluids are not spread.
The owner at the London restaurant proclaimed that consuming food in public in the nude was “an act of rebellion.”
“When you get a chance, you take your clothes off,” he told the Washington Post. “When you get in bed, you take your clothes off. When you go to the beach or a sauna, you take your clothes off. It’s natural.”
And in New Castle, you can now take your clothes off when you go to the bar…