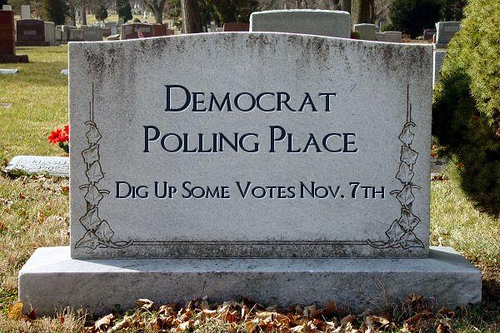 GARFIELD COUNTY, Colo— Not only are people struggling to decide which candidate to vote for in the upcoming election, local officials are concerned that dead people are casting votes around the county.
It has been discovered that votes are being cast by deceased people who are no longer eligible to vote.
“The people were able to cast votes that was not theirs to case,” said an official from the Clerk and Recorder’s office. “In case you didn’t know, once you croak, you give up all your voting rights. Although this year, some people might rather croak than vote for the candidates.”
It is not clear how many fraudulent votes have been cast, but there is a current investigation into exactly who voted for the current county commissioners. Local town and city officials are also being examined.
“Dead people should just be dead and not get into politics,” one local official stated. “They should be handing out candy at Halloween or something.”
Since 2012, 448 dead people have been removed from the registered voter list.
Now if only we could do something about the candidates…

← Send in the clowns!
Digital detox being offered in Rifle →