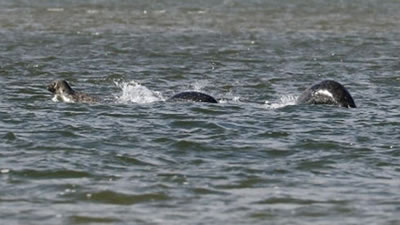 RIFLE, Colo. — A creature that looks a lot like the world famous Loch Ness Monster has been seen at Rifle Gap recently and several visitors have taken photos to prove it.
The monster, who originally hails from Scotland where there has been more than 1,000 sightings of the creature, apparently has kin folk in Rifle.
The monster is known as “Nessie” in Scotland and is described as being large, with a long neck and one or more humps that protrude from the water.
“We’re not sure if it came to Rifle to celebrate Halloween,” a city parks worker said. “But several people have seen it and taken photos.”
Rifle Gap will not be closed, but swimming in the water is not recommended.