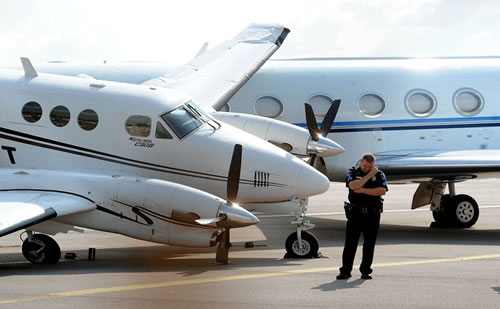 Clinton, Trump run into each other in Aspen

ASPEN, Colo. – Hillary Clinton got an unwelcome surprise when she flew on a donor’s private King Air turboprop from Denver to Aspen on a recent campaign stop. Her pilot apparently didn’t see the Gulf Stream G550 sitting on the tarmac at Sardy Field in Aspen, belonging to Donald Trump who was on  board.
A loud shouting match ensued between the two candidates and police had to be called to quiet the kicking, spitting  and screaming.
But this wasn’t your normal run of the mill political fight between Mrs. Clinton and Mr. Trump, who are both running in the 2016 presidential election.
No, this was personal.
“I’m glad NBC cancelled your stupid Miss USA pageant,” Clinton screamed.
“And you’re UGLY!” Trump yelled back.
When police arrived, each party was issued a summons for disturbing the peace.

Note:  This is a fake news story. Mrs. Clinton would never be caught dead in flying in such a low-end aircraft.