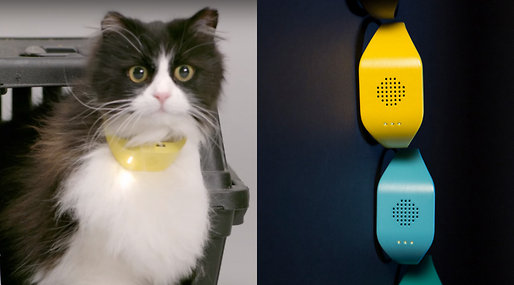 Washington, D.C.— Presidential hopefuls Hillary Clinton and Donald Trump may soon be wearing collars that use the same technology as the “Temptations Catterbox, a new device that translates a cat’s meow into a human voice.

The invention, which was created recently in London, has prompted the Federal Election Commission to adapt a similar technology for use on all U.S. politicians running for elected office. It is believed the device contains a microphone, speaker, bluetooth and wifi technology, and utilizes futuristic artificial intelligence algorithms.

Use of the device may soon be required by all politicians, especially those running for president, in order to understand what they’re actually saying. “It’s quite a challenge to understand exactly what the candidates are trying to say, so we thought it would be in the best interest of the American public to take advantage of this technology,” an un-named commission official said.

The Catterbox, which was developed by Temptations Lab in England, is available in four colors, which should coordinate well with Clinton’s orange pant suit and Trump’s ties.

← Clinton, Trump run into each other in Aspen
Woman uses mannequins instead of real life family members →