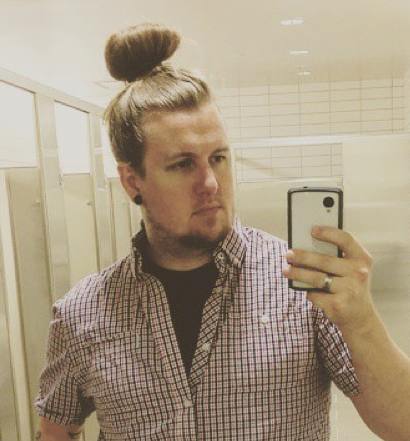 RIFLE, Colo. — While the city is known for its ranchers and cowboys, it is also showing its hip side as men throughout the city are now sporting the trendy “Man Bun” hairstyle, along with carrying the “Man Purse.”
And by “Man Buns,” we are talking hair, not buttocks…
According to reports, the hairstyle is challenging stereotypes everywhere, with more and more men growing out they hair to pull it back and tie up to the center of the head. It can be laid back and relaxed or office appropriate. There are limitless options to wearing the Man Bun.
For the office appropriate look, slick back the top of your hair and tie it in a tidy bun.  For a sporty look, wear a loosish bun with some hair left hanging out.
But not everyone is a fan of the Man Bun. The TV show “Pop Trigger” reports that pranksters are ambushing and cutting off men’s Man Buns in public with the slogan, “Stop the Knot!”
“I can’t imagine something so cruel,” said Brett Erlich, co-host of the show. “It’s even in the Bible where it says ‘how can you criticize the splinter in my eye when you have a log in your own?’”
He likened criticism of the Man Bun to that of parents who put a barrett in the top of their child’s hair and do the “whale spout look.”

Of course, if you want to wear a Man Bun, you’ll need to grow some hair out and it can take more than a year if you have very short hair. If you have medium length locks, it shouldn’t take longer than eight months
“I’m definitely going to start wearing a Man Bun,” said Rifle Mayor McCheese. “And I think we’ll require everyone on city council to wear them as well. It’s a very sexy hairstyle.”
If you’d like, you can also add the “Man Purse.” This item is a usually leather or canvas bag that is worn across the body and typically used by metrosexual men in urban areas.
“But we don’t recommend men carrying a man purse around here,” Rifle’s police chief warned. “There’s a good chance that you could get shot.”