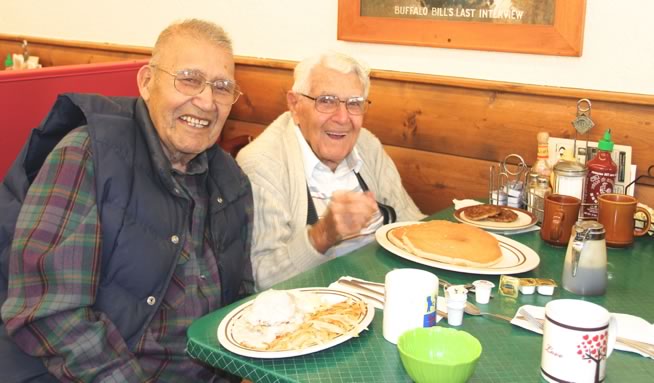 RIFLE, Colo. — If you look at the first table on the right when entering the Base Camp Cafe downtown in Rifle on a Wednesday or Saturday morning, you’ll most likely see two of Rifle’s longtime and illustrious residents — Ted Diaz and John Scalzo.
The pair have been friends since they were kids and meet every Wednesday and Saturday mornings at the Base Camp Cafe downtown to have breakfast.
Diaz, 93, and Scalzo, 91, get together and talk about sports and what’s going on around town. Diaz is an avid Rifle High School football fan and didn’t miss a game for 62 years. Scalzo is a former mayor of the city of Rifle and  an active participant in city politics.
“After the war, we got together at the bowling alley and we golfed together,” Scalzo said. “Then about two years ago we started meeting every Wednesday and Saturday.”
Diaz retired as a janitor and bus driver for the Re-2 school district and Scalzo, who had joined the Merchant Marines, retired in 1946 and opened a liquor store where Jon’s Liquors is now located on West Third Street. At one point, Diaz worked for Scalzo at the store. Scalzo later operated a car wash.
The pair always meet at 9:30 a.m. at Base Camp and they each have their favorite breakfast. Diaz has a half order of The Packer, which is biscuits with gravy, eggs and a bowl of grits. Scalzo goes for the two pancakes – which are bigger than the size of his head – and two sausage patties. And, of course, the waitress knows them by name.
Two great men and good friends.