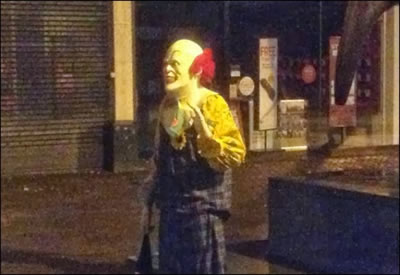 Creepy clown crops up in the valley

GARFIELD COUNTY, Colo. – He hasn’t been sent to us by Judy Collins, but a mysterious creepy clown has been spotted all over Garfield County standing on street corners and freaking people out.
The anonymous clown doesn’t say anything, but simply stands motionless and just stares at people with his painted face as they walk past.
“It’s pretty creepy,” said one passerby. “He reminds me of something out of a Stephen King movie. This guys isn’t like one of the funny circus clowns we saw when we were kids. This clown looks like he’s out of a horror flick.”
Police aren’t quite sure what to do about him. It’s not illegal to dress up like a clown and stand on a street corner.
“Although we might consider a disturbing the peace citation if he starts making the little kids cry,” said one police officer.
Or an adult, for that matter.
The clown has been seen everywhere from Aspen to Parachute and police say they have received numerous phone calls from concerned citizens.
There is such thing as an irrational fear of clowns known as coulrophobia. “Coulro” comes from the ancient Greek word for “one who walks on stilts.”
Symptoms include intense feels of dread, increased, sweating, nausea and anger.
If you suffer from coulrophobia, blame Judy Collins, who insists “there’s got to be clowns.”

Note: This is a fake news story.  This sort of thing only happens in California.