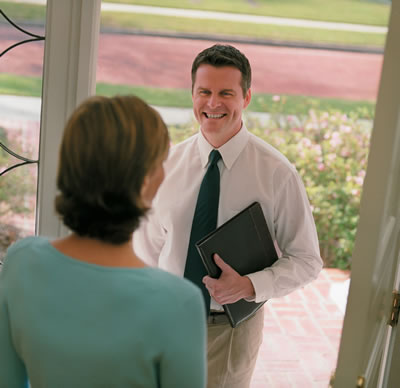 RIFLE, Colo — A group of local residents are fighting back against solicitors who come knocking on their door to distribute religious material.
“I’m sick and tired of people coming onto my property and shoving religious paraphernalia in my face,” one resident said. “You don’t see people coming to your house and distributing free communist propaganda, not yet at least.”
Another woman said she didn’t get mad, she just tried to make a deal with the solicitors.
“I thank them for the material and then I offer them free copies of my Victoria’s Secret catalog and tell them I’ll read theirs if they’ll read mine,” she said.
The male solicitors usually turn red in the face and stuff the catalog in their jacket pocket, she added.
“But I’ll bet they read it when they’re alone.”
According to a city ordinance, solicitors are not allowed on properties that have clearly visible signs that prohibits them.
Fines include having to pick up dog doo at Centennial Park or mandatory participation at five city council meetings.