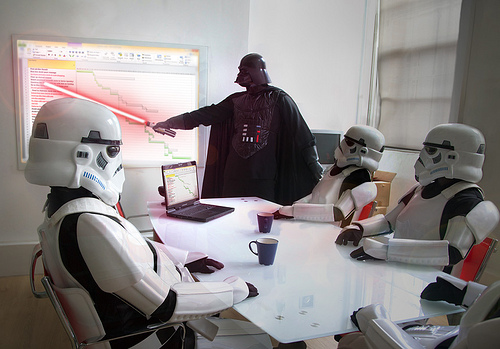 RIFLE, CO — With a number of city councilors noticeably absent at a recent budget workshop meeting, the council and city manager decided to dress up in Star Wars Rebels costumes to make the meeting somewhat more fun.
It also gave them the chance to go to sleep without anyone else in the room noticing.
The meeting lasted for two and a half days, at which point the costumes started to get extremely uncomfortable. City manager Matt Fishhead, dressed as Darth Vader, threatened to bop the Rebels on the heads with his lightsaber if they didn’t adjourn the meeting soon.
“Just APPROVE it already,” Fishhead said. “I’m tired of looking at this budget and going to these workshops. And I can’t eat or drink anything with this damn mask on.”
FIshhead wasn’t sure which one of them was Mayor McCheese, or if any of them were, because they all looked alike.
Finally, one of the council member Rebels suggested that they adjourn the budget workshop before somebody made a movie out of it.