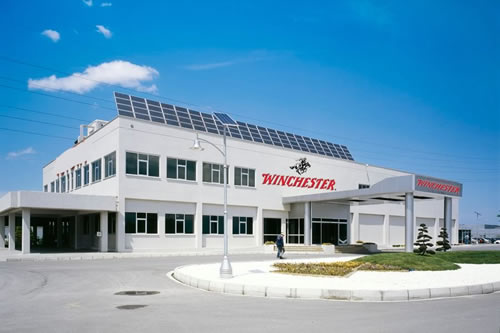 Rifle fired up to get new Winchester plant in town

RIFLE, CO — In a surprise announcement at their April 2 meeting, city council members revealed that a new Winchester manufacturing plant would be opening in Rifle this summer simply because they liked the city’s name.
Construction of the new 50,000-square-foot plant is set to begin this month at its location just west of the city and completed by the end of August.
“This is such a good thing for us,” gushed Mayor McCheese. “The Winchester plant will create hundreds of high-paying jobs right here in the city. Even those who don’t like guns, have to admit that’s a feather in our cap,”
The average wage is reportedly expected to start at $52,000 for applicants that have a high school diploma and go up from there. The jobs will also include health care benefits and large life insurance policies.
“And that’s not all,” McCheese said excitedly. “This plant will use large solar array panels, which will further Rifle’s reputation as a state leader in the use of solar energy.”
And because Rifle will be the new home of environmentally conscious gun enthusiasts, some councilors suggested the city’s slogan be changed to, “Shoot an animal, plant a tree!”
As part of the incentive plan to get Winchester to build a plant in Rifle, the city agreed to waive the requirement for a gun permit, along with any kind of background check needed to carry, purchase or pawn a gun.
Rifle’s police chief expressed some concern about the whole free-wheeling gun attitudes, but was warned by McCheese that he would be put on perpetual bike rodeo duty if he didn’t shut up.
To emphasize his point, McCheese pointed a loaded rifle at the ceiling of council chambers and shot it off, indicating that the council meeting was over.