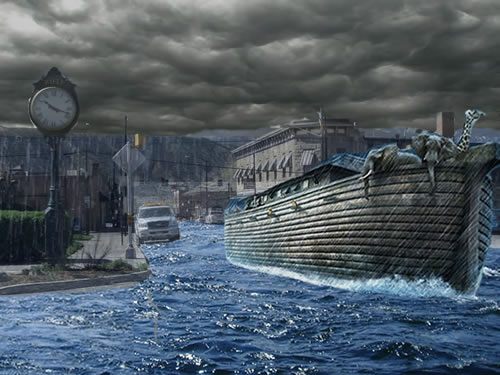 RIFLE, CO — Because of the torrential rains seen in the area recently, it was no surprise to see Noah’s Ark floating down Railroad Avenue on a recent Sunday morning.
The ark was carrying some animals, but some people hitched a ride to get from one end of town to the other as the RFTA bus could not negotiate the flooded streets.
“We’re just fortunate that Noah was gracious enough to help folks out,” said Mayor McCheese. “And people liked seeing the pairs of animals on board – it was kind of like being on a floating zoo.”
While there are no big predictions for rain in the next week, the rain has greened up many of the yard in town, which had dried up over the summer.
“I’ve even got mushrooms growing on my front lawn,” bragged one resident. “They just popped up, so I picked ‘em and I think I’m going to start a medical mushroom dispensary.”
However, city officials warn against it, since Amendment Mushroom has not yet been approved by Colorado voters.
Some people complained about all the rain and the fact that the city has a famous ark cruising around, while others said they thought the flooded streets were neat.
“I feel like I’m in Venice, Italy,” one woman sighed. “Now if someone would just start a gondola service, that would be so romantic.”
When the rain finally ceased, the streets eventually cleared and the ark went back to wherever it came from.