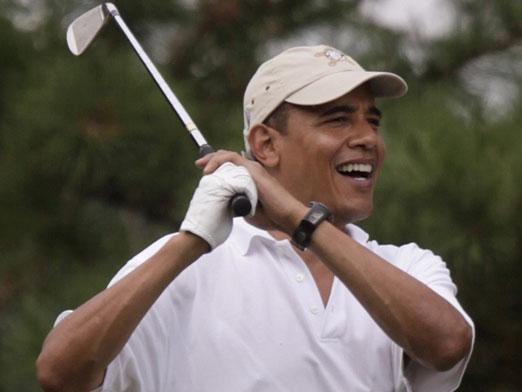 RIFLE, CO— Curious residents might be wondering why so many black SUV’s have been spotted in and around the Rifle area for the past several days.

But it’s not a funeral and it’s not the FBI.

The Cow Pie Courier has learned that President Barack Obama will be arriving at Garfield County Regional Airport on Air Force One “sometime in early August” so that he can play 18 holes at Rifle Creek Golf Course. But don’t make any plans to see or greet him.

Unfortunately the President has no time on his schedule to meet with local officials or reporters – he has just enough time to drive through town and get to the course, play 18 holes, and resume his trip to the west coast.

Sadly, the golf course will be closed during Obama’s visit and no other golfers will be allowed to play the course during that time.
“We want to give the President his privacy,” said Rifle Creek’s head golf instructor, Chester Cheatmore. “We want him to enjoy a fantastic round a golf and have the freedom to modify his scorecard without anyone looking over his shoulder. It’s a special service we offer to VIP’s here at the Rifle Creek Golf Course…”

According to White House officials with knowledge of the president’s schedule, Obama may stop at Shooter’s Grill for a cheeseburger and say hello to the pistol-packing babes before heading off to Los Angeles for a fundraising event.