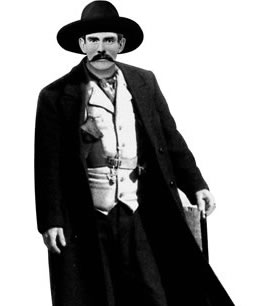 RIFLE, CO — Cool or creepy?
Most people reacted one way or the other after seeing the ghostly hologram of Michael Jackson perform on stage at the Billboard Music Awards late last month.
The 50-year-old pop star died in 2009 from a drug overdose.
And now with their own state-of-the-art performing arts center, the city of Rifle has decided it also wants to bring back famous dead people and feature them on the stage of the New Ute Events Center on Fourth Street.
“We can do that,” said a member of the New Ute Events Center board. “Michael Jackson wasn’t even real a hologram. They were using an old magicians trick using a mirror for a 2D effect known as ‘Pepper’s Ghost.’”
But whatever method was used, the board has decided to bring back John Henry “Doc” Holliday to the stage. Holliday was a famous Old West gunfighter, gambler and dentist in the late 1800’s who eventually died of tuberculosis in 1887 at the age of 36 in Glenwood Springs.
If the holograms are successful, it has been suggested they also be used at city council meetings to stand in for the real city council with the hopes that maybe somebody would actually attend or listen to a meeting.